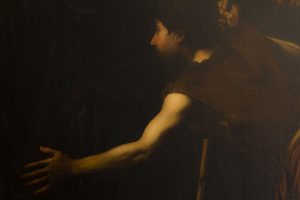 Starting 1 July 2019 you can buy Firenze Card, the multi-purpose ticket that give you access to the whole Florence museum circuit, also in the Museum of Misericordia, on the fourth floor of the historic headquarters in Piazza Duomo.
Firenze Cards will be sold exclusively through debit or credit cards.

On 20 January 2016, the new Museum of Misericordia di Firenze was inaugurated in the presence of S. E. Cardinale, Archbishop Giuseppe Betori, on the fourth floor of the See in Piazza Duomo.

Its realization is the result of three intense years of work, which led to the definition of a museum that winds through 14 rooms, distributed in about 600 square meters. The project was designed by the architects Noferi and Locorotondo and was followed by the engineer. Mauro Romero as Head of the Guard responsible for Buildings of the Archconfraternity and by Enrico Santini, Head of Guard responsible for the Museum and the Artistic Heritage.

Inside, the role that the association has had for Florence is witnessed. The Misericordia was born when the Dominican Pietro da Verona, arrived in Florence to fight the heretic patari. Citizens ‘companies were formed – the Companies of the Faith – which in a few months were the opponents’ right. At that point, laid down the sword, those same men cradled the rosary to devote themselves to works of mercy.

And so, almost 8 centuries ago, an Institution was set up that put itself concretely at the service of the neighbor and became an example of boundless charity, inspiring the birth of numerous sisters: today there are 700 Misericordia in Italy in the world.

The role played by the Florentine association, as shown by numerous archival documents, became more and more a social service. So that its history went to intertwine, firmly, with that of the city that was its cradle. Several times the Medici, the Lorraine, but also the now united Italy, turned to the Misericordia to solve problems of a collective nature.

So it was for those beggars and their needs, the mentally ill, the orphans, the widows, the assistance of those condemned to the dead and their families.

Among the Brothers of Misericordia di Firenze we find princes and dukes, kings and heads of government, priests, artisans, workers, men and women of the Florentine people. Their names are kept in the great registers that, for centuries, have been preserved in the Archive. The city is proud of their example, because thanks to their contribution Florence has not been excellence only in the arts, in business, in finance and in science, but also in the attention to the last ones.

The choice of the works, archival documents and objects that synthetically contain the nearly eight centuries of history of our Archconfraternity took place, by the head of the artistic heritage Enrico Santini, with the precious collaboration of the Superintendency for the Fine Arts and Landscape of Florence – in the persons of Dr. Maria Matilde Simari and Dr. Jennifer Celani – and of archivists Dr. Barbara Maria Affolter and Dott.ssa Laura Rossi.

Four films, projected on special screens, illustrate – in Italian and English – the origins, the history of Misericordia di Firenze, the period of the plague and the services that, today, the Arciconfraternita performs.

The museum itinerary includes the testimonies of over seven centuries of activities, artistic commissions, legacies and donations – a tangible sign of the Florentine people’s gratitude towards the Institution – until now only partially visible to the public, because they are kept in offices and archives of the Misericordia of Florence.

It is a rich exhibition that contains about eighty pieces, many of which have been specially restored for the Museum, including manuscripts, paintings, coats of arms, furnishings, objects of use and artifacts of Florentine craftsmanship; as well as a copy of 1500 of the Statute of the Archconfraternity.

All works that Misericordia di Firenze has preserved with care and love, as evidence of respect for the memory of benefactors.

Through the individual rooms it is possible to notice how the Archconfraternity has always been in step with the times, knowing how to actualize the historical, social and technological context. In the transportation of patients, for example, we moved from “zana” to “cataletto” and then, after a long evolution of means of transport, to ambulances equipped with modern instruments.

The Museum is open – to individuals or groups – every day 9am-5pm.
Closed on January 1st, Easter Day and December 25th.
Ticket price: € 5

The museum itinerary is accessible for wheelchairs

List of main works:
– Pietro Annigoni, San Girolamo Penitente, oil on canvas and San Girolamo, mixed technique on paper;
– Caravaggio’s artists: the Christ among doctors, oil on canvas by Dirck Van Baburen, of the seventeenth century. and Return of the prodigal son of Valentin De Boulogne, (oil on canvas of the early seventeenth century) which, after a restoration work, will be lent to the New York Metropolitan museum first and to the Parisian Louvre later;
– attributed to Francesco Del Brina, Madonna with Child and San Giovannino, oil on board;
– Stations cross belonging to the Bottega del Giambologna;
– two painted terracottas (Gesù Bambino and San Giovannino) of the Bottega Della Robbia of the XVI century;
– two sculptures by Francesco Collina representing San Sebastiano, one in bronze, the other in terracotta;
– two oils on board by Santi di Tito, San Sebastiano 1578 – 1580; San Tobia 1578 – 1580 and the seven Works of mercy
– Carlo Dolci, San Giovanni Battista oil on panel, from the seventeenth century;
– Sienese school, Madonna and Child, tempera on wood and gold leaf, from the 16th century;
– Francesco Ubertini, known as Bachiacca, Madonna with Child, San Giuseppe and San Giovannino, oil on wood, mid-16th century;
– Benedetto di Leonardo, known as Benedetto da Maiano, Crucifix, sculpture in painted wood, from the fifteenth century;
– Giovanni Antonio di Francesco Sogliani, Madonna with Child and San Giovannino, oil on wood, from the 16th century, gift of the Grand Duke of Tuscany Pietro Leopoldo;
– Elisabeth Chaplin, La beatitudine, oil on canvas, from the 20th century.