In 1244, the Dominican friar Pietro da Verona arrived in Florence to fight the patarina heresy which was progressively establishing itself in more social classes. The passionate sermons of the friar give life to a series of initiatives, among which the foundation of faith companies with particular devotion to the Virgin Mary. This context also includes the birth of the Confraternity of Santa Maria della Misericordia, dedicated to work for the needy, the works of evangelical mercy.

The first news about a permanent home of the Florentine Confraternity dates back to 1321 when, thanks to a donation, the Brothers bought the portion of a house owned by Baldinuccio Adimari in the homonymous alley.

In 1329 the Compagnia, through a provision of the Municipality of Florence that allowed it to be elected “captains”, became a publicly recognized institution.

After the plague of 1348, during which the Brothers were at the forefront of the relief work, they succeeded in enlarging their premises by equipping it with an oratory and a frescoed loggia, closed by elegant iron bars (the current Loggia </ em> of Piazza S. Giovanni).

In 1425, the Florentine government, to save the Bigallo Company close to bankruptcy, decreed the union of Bigallo and Misericordia, creating discontent in both companies. In fact, a few decades later, a large group of brothers decided to break away from the forced partnership to give life, in 1490, to a “New” Mercy “more chalda in the works of mercy and charity than ever” (Statutes 1490). Restarting means reformulating the statutes and identifying a new residence, an undertaking that is not easy to implement, given that the brothers do not intend to leave Piazza Duomo. Pressed by necessity, they decide to take “a pigione” a local dell’Arte dei Corrazzai, where to transfer household goods and objects of immediate utility. In 1498, a new wave of plague struck the city and the Municipality asked the renewed Compagnia to collaborate in the relief activities to the population. The “New Mercy” accepts and, in addition to taking responsibility for the management of the hospital, in particular the new “Lazzaretto of San Bastiano outside the walls” (later Montedomini), organizes surveillance services for “suspected cases”, burial of “Morbo”, of the construction of wooden huts as “isolation” structures and more. In 1525 the Company’s Brothers left the lodgings, which proved to be insufficient due to the lack of an oratory, and moved to the nearby parish church of S. Cristoforo degli Adimari granted to them by Pope Clement VII. There the Brothers remain until 1576, the year in which the Grand Duke Francesco I de ‘Medici, accepting a request from the newly-appointed administrator Simone di Nunziato Santini, assigns to the Company of the premises in a building in front of Giotto’s bell tower, where even today Mercy resides. 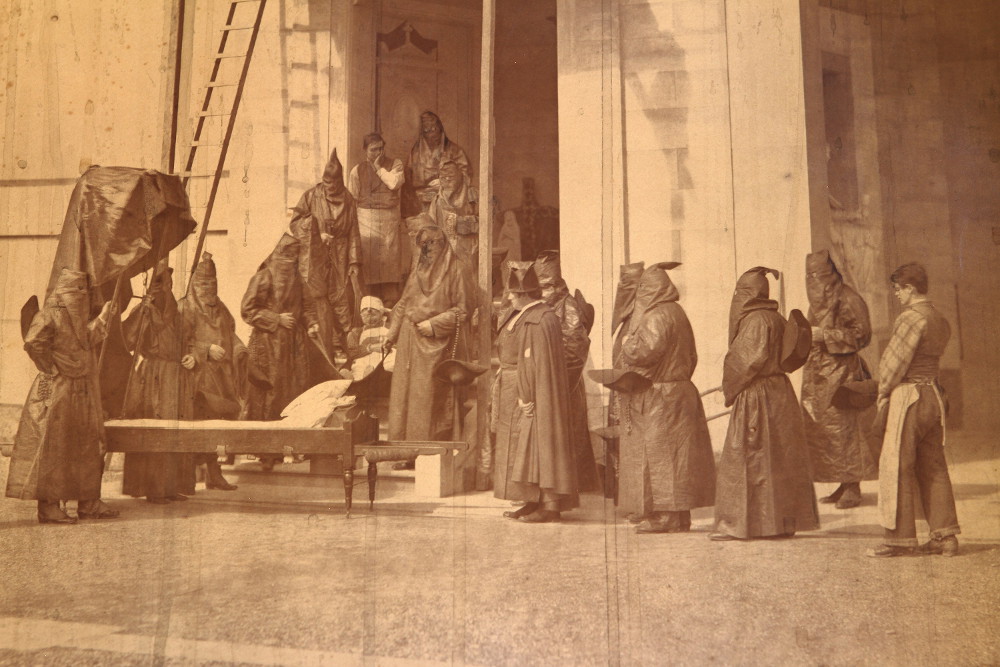 Since its origins the Archconfraternity has worked for the transportation of patients in hospitals and for funeral services; but his commitment has been lavished on a larger relief work, also concerned with equipping poor girls, freeing prisoners for debts, providing subsidies to destitute sick people and providing for the burial of the poor. It was certainly, however, in the course of the numerous plagues, which from 1325 onwards struck Florence, that the Brothers of Mercy provided the greatest proofs of charity. They wandered through the streets of the city with the characteristic “funny” – the lower part of the hood that had the purpose of keeping the benefactor’s face hidden because the good had to be done anonymously – to give aid to the plague victims.

Over the years the Compagnia’s commitment has been lavished with works of ordinary and extraordinary social-health assistance, both independently and in concert with the various forms of government that have followed over time. In addition to transporting sick and wounded and burying the dead, it has also been dedicated to more specific tasks in various eras, such as assistance to those sentenced to death, visits to prisoners, the transport of “mind-minded” to the service of “mutations” “(The humble and noblest service of” changing “clothes to the sick). 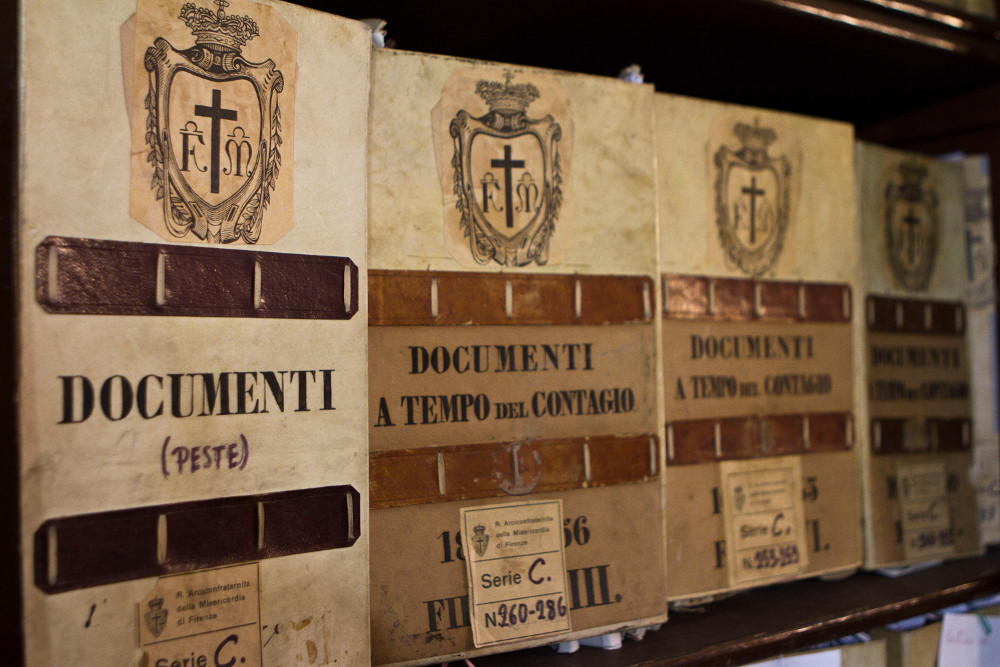 Over the centuries the commitment of the Brothers with the black robe has never failed: from the plague years to the epidemics of typhus and cholera; from the first world war to the epidemic of Spanish fever of 1919 and the tragic explosion of the powder magazine of San Gervasio in the district of Campo di Marte, from the incursions areas of the last conflict to the convulsive days of the resistance. Also on the occasion of the last catastrophe that has affected Florence, the flood of 1966, the Misericordia, flocking with men and means in the areas most affected by the waters of the Arno, has brought relief and support to the Florentines. 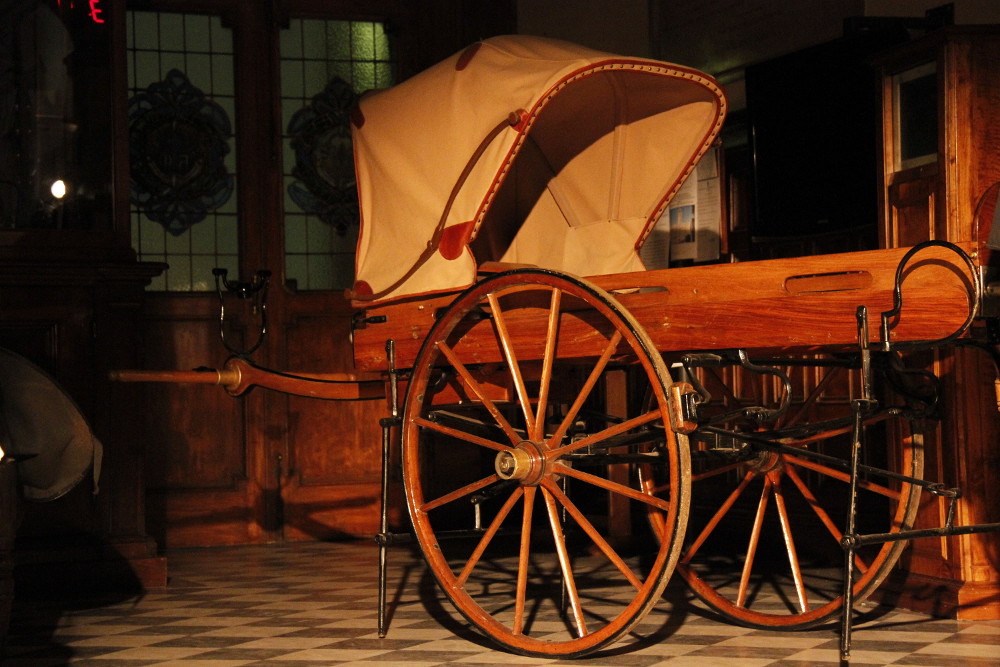 From the year of its birth almost eight centuries have passed, during which the Confraternity has never interrupted the its mission of charity and solidarity, knowing how to actualize with respect to the historical and social context in which it was called to operate, fusing tradition and modernity. From emergencies to home care for the elderly and the sick, from the transport of the sick to the emergency service, from the supply of health equipment to blood donations. Today the Misericordia of Florence is a modern and efficient structure able to offer concrete answers to the most varied needs of citizens. Food Aid, Civil Protection, the Anti-Wear Listening Center, the San Sebastiano Foundation for people with intellectual disabilities, specialist clinics and instrumental diagnostics, Residences for the elderly speak of a constant and attentive commitment to modern emergencies . On 20 January, the Feast of San Sebastiano – Patron of the Sodality – of 2005, the Misericordia of Florence inaugurated the museum inside its historic location in Piazza del Duomo. The rooms, used for this permanent exhibition, contain objects and images relating to the seven centuries of life of the venerable Florentine Archconfraternity: a path deliberately created to tell the history and traditions of one of the most long-lived and active city institutions.